When you book with an account, you will be able to track your payment status, track the confirmation and you can also rate the tour after you finished the tour.
Sign Up
910

Today we Travel  to Delhi from  Mumbai,after arrival at Delhi we proceed to our splendid Destination leh. After reach at leh we check inn. Hotel.leh is located in among the highest range of valley region of mountains so Rest of day leisure for rehabitation and  adjustment by physically and mentally in dry and cold harsh environment of leh

In pleasant misty morning with surrounding in mountain range view, we will take delicious breakfast and after it  proceed to visit leh local  sightseeing  for explore new era of nature untouched beauty, we visit shey palace, Hemis Monastery,Shanti stupa,after it we will visit famous Rancho’s  3 Idiot Movie fame school.later we visit Indus River. after it we return to hotel. Enjoy traditional and cultural programme at evening.  Overnight stay at hotel 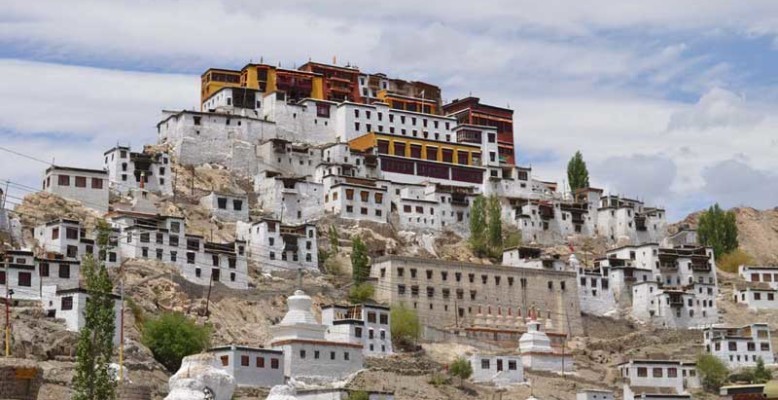 Leh (Hindi: लेह; Tibetan alphabet is a town in the Leh district of the Indian state of Jammu and Kashmir. Leh district, with an area of 45,110 km2, is the second most expansive district in the country, after Kutch in Gujarat. It was the capital of the Himalayan kingdom of Ladakh, seat of which was in the Leh Palace, the former mansion of the royal family of Ladakh, built in the same style and about the same time as the Potala Palace-the chief residence of the Dalai Lama until the 14th Dalai Lama fled to Dharamshala, India, during the 1959 Tibetan uprising. Leh is at an altitude of 3,524 metres (11,562 ft), and is connected via National Highway 1 to Srinagar in the southwest and to Manali in the south via the Leh-Manali Highway. In 2010, Leh was heavily damaged by the sudden floods caused by a cloud burst.

Leh was an important stopover on trade routes along the Indus Valley between Tibet to the east, Kashmir to the west and also between India and China for centuries. The main goods carried were salt, grain, pashm or cashmere wool, charas or cannabis resin from the Tarim Basin, indigo, silk yarn and Banaras brocade.

The Shey Monastery or Gompa and the Shey Palace complex are structures located on a hillock in Shey, 15 kilometres (9.3 mi) to the south of Leh in Ladakh, northern India on the Leh-Manali road. Shey was the summer capital of Ladakh in the past. Hemis Monastery is one of the biggest and wealthiest monatries in ladakh. Presently,Hemis gompa leh is run by Drukpa sect of Buddhism, which once flourished during the Namgyal dynasty. Shanti Stupa is a Buddhist white-domed stupa (chorten) on a hilltop in Chanspa, Leh district, Ladakh, in the north Indian state of Jammu and Kashmir. It was built in 1991 by Japanese Buddhist Bhikshu, Gyomyo Nakamura and part of the Peace Pagoda mission. The Shanti Stupa holds the relics of the Buddha at its base, enshrined by the 14th Dalai Lama.[2] The stupa has become a tourist attraction not only due to its religious significance but also due to its location which provides panoramic views of the surrounding landscape.

Today  after delicious breakfat we will proceed to explore khardung la pass  which is Highest motorable road in the world after it we visit  splendid Nubra valley en-route we will visit cold desert. shopping in evening,  after it leisure time for relaxing  , overnight stay at Tent With stunning  morning view of Nubra Valley we will enjoy delicious breakfast, after it we check out from hotel and proceed to Leh. Enroute visit Diskit Monastery Overnight stay atleh hotel After delicious breakfast  we proceed to visit pangong lake (This site has become famous after the success of 3 idiots movie) See picturesque landscapes at Nimmu village.later we will  Visit Likir Monastery,overnight stay at Tent After delicious breakfast we will proceed to leh enroute we will explore Gurudwara Pathar Sahib, Drive to Magnetic hill, See picturesque landscapes at Nimmu village.later we will  Visit Likir Monastery,Indus and zhanskar Rivers  sangam,Hall of Fame Museum,evening at leisure.overnight stay at hotel. After delicious breakfast we check out from hotel.with awesome memories, rejoiceful smell of misty snowy mountains, unforgettable and unknown taste of  journey we proceed to our return journey to amchi mumbai  as per schedule.tour